It was a beautiful, sunny morning when I stepped off the overnight bus from Loja, Ecuador. The traffic in Piura was just beginning to hum along Avenida Sánchez Cerro. As I hoisted my knapsack, I pondered whether to head straight to Máncora and the other north coast beaches or to spend a few days here in Piura getting to know the surrounding villages. I’ve always breezed through this town, one of northern Peru’s main transportation and commercial hubs. But I thought this time I wanted to savor it. I chose a hotel downtown, near the Plaza de Armas and restaurants serving everything from vegetarian to traditional menus. The coastal desert, of which Piura is a part, offers food dishes endemic to the area. Every day, the lunch special includes an appetizer of ceviche, the classic Peruvian dish of raw fish marinated in fresh lime juice and spiced with hot peppers, and served with corn-on-the-cob and sweet potato. On Sundays, the regional specialties are served up, including pato con arroz (duck served with seasoned rice) and chivito (kid goat). Other delicacies of Piura’s desert cuisine are goat cheese (queso de cabra), olives, and algarrobina (carob, Prosopis pallida) liqueur and candies.

I went to the tourism office on the Plaza to find out about the nearby villages. Chulucanes and Catacaos are renowned for their artisans, and both have ancient ruins. On the coast are several small balnearios, or beach towns that are virtually unknown to foreign travelers.

Just a half-block away I found Casa Museo Gran Almirante Grau (Tacna 622. Hours: Monday-Friday 9 a.m.-noon, 3:30 p.m.-6 p.m.; Saturday-Sunday 9 a.m.-noon. Entry: free). This 18th-century mansion was the childhood home of Miguel Grau, one of the heroes of the War of the Pacific (1879-1883) against Chile. The displays recount not only Grau’s life but also Peru’s naval history.

In search of the Vicus’ roots, I headed to Chulucanes, 49 kilometers east of Piura. Seven kilometers southeast of Chulucanes is the namesake mountain, Cerro Vicús, which is the site of the ruins of an important ceremonial site. An estimated 2,000 tombs were sacked by grave robbers during the 1950s. The site may be visited at any hour and the entry is free. I also found living vestiges of Vicús culture at La Encantada, a dusty compound of houses surrounded by lemon and mango groves five kilometers east of Chulucanes. I visited some workshops that produce ceramics with ancient techniques and motifs. Artists Max Inga, Teodoro Yamunaqué and others have introduced modern themes to the designs.

Another day trip brought me to Catacaos, also known for its artisans. I passed several hours wandering through the market maze on Jirón Comercio. Its stalls were filled with ceramics made as in pre-Hispanic times, straw hats and fans (the women offer lessons in weaving) and spectacular silver filigree statues and jewelry. Just past the market is the Casa de la Cultura’s museum with crafts and archaeology artifacts (Comercio 748. Hours: Monday-Friday 8 a.m.-1 p.m. and 2-8 p.m., Saturday 8 a.m.-1 p.m. Jr. Entry: free).

Before the Spaniards arrived, the Tallán culture reigned here. Five kilometers from Catacaos is Narihualá, an archaeological site that dates to 1000 BC (Hours: daily 8:30 a.m.-4:30 p.m. Entry: $0.75). The site includes a ceremonial plaza, step-pyramid, and several temples, as well as an abandoned Spanish church. The museum offers information about the Tallán culture and artifacts unearthed at this site. Every year on January 6th is the Bajada de Los Reyes (Arrival of the Three Kings), a procession of traditional indigenous dancing from Narihualá to Catacaos.

To the Coast of Northern Peru

While it was fun to explore artisan villages and ancient cities, I was also ready for a bit of beach action. So, I took a bus to Paita and immediately transferred to a minivan to Colán, 15 kilometers to the north. I arrived just in time to enjoy a fresh fish dinner and beer on the porch of my hostel while watching the sunset over the Pacific Ocean. Colán is a favorite Peruvian beach destination. The water is just warm enough for a dip (beware of stingrays at low tide). Playa Esmeraldas, a five-kilometer strand of grey sand, leads to fossil-embedded bluffs tumbling into the sea. All along the way, you can see Blue-footed Boobies, Whimbrels, Oystercatchers, frigate birds, pelicans and several species of gull. About a kilometer from the beach is Iglesia de San Lucas (1535). This church, built atop a Chimú temple, is said to be the oldest on South America’s Pacific coast. It is the stage for the feast days of the village's patron saint Santiago, celebrated with traditional dances from July 17th-27th.

I made a day trip into Paita. Walking from the bus terminal to the waterfront, I passed the house of Manuela Sáenz (Jirón Nuevo del Pozo 390), the Independence Wars heroine and confidante to Liberator Simón Bolívar. Near the plaza, there are several colonial buildings: Iglesia de la Merced, the Club Liberal, and the old Customs building. Then with a local fisherman, I took a half-hour tour of the bay to the sea lion colonies ($1 per person). After a week of relaxing in Colán, I checked out the beaches south of Paita. The first one is Yacila, which celebrates the Fiesta de San Pedro y San Pablo, the patron saints of fishermen every year from June 28th-30th. When the daily catch came in, sea lions, pelicans, and man-of-war birds swarmed boats laden with fish and pota (giant squid). Basillos (traditional rafts made of five logs) and boogie boarders bob in the sunset-gilded waters.

The sea was too rough to hike the coast to the next beach, Los Cangrejos, which is where I wanted to see the Humboldt penguins that nest in the cliffs there. So instead, I took the inland road (2 kilometers). It was low season, and so the only hotel was boarded up. Sand dunes mound around vacation cottages and one family offers lodging in a few spare rooms as well as camping in the yard. The beach here stretches for many kilometers!

Getting to Piura and Northern Peru

Piura has no central bus terminal, so use the following departure locations depending on where you’re headed: To Chulucanes: Buses regularly depart from Terminal Terrestre de Castilla on the other side of the river.

To Catacaos: Shared taxis leave when full from the corner of Avenida Loreto and Jirón Tumbes (daily 6 a.m.-9 p.m., $1). Opposite the plaza in Catacaos, the taxis return to Piura. From Catacaos to Narihualá, take a motorcycle rickshaw from the corner of Jirón Comercio and Avenida Heredia ($2 one way).

To Paita: Transportes Dora has schedules here on AndesTransit, which basically depart every half hour between 6 a.m. and 6 p.m. Their departure point is on Avenida Cerro Sánchez and Avenida Gullman, 45 minutes, $1.50.

In Paita, the Dora terminal is at Jirón Zanjón and Loreto. On the opposite corner is the lot from which transport to the beach towns depart:

Lorraine Caputo is a travel writer, poet, and translator. She has authored twelve guidebooks for South America. Her literary works appear in over 150 journals in Canada, the US, Latin America, Europe, Asia, Australia, and Africa; eighteen anthologies and twelve chapbooks – including the collection of travel poetry, Caribbean Nights (Red Bird Chapbooks, 2014). For the past decade, she has been traveling through Latin America, listening to the voices of the pueblos and Earth. Follow her travels at www.facebook.com/lorrainecaputo.wanderer. 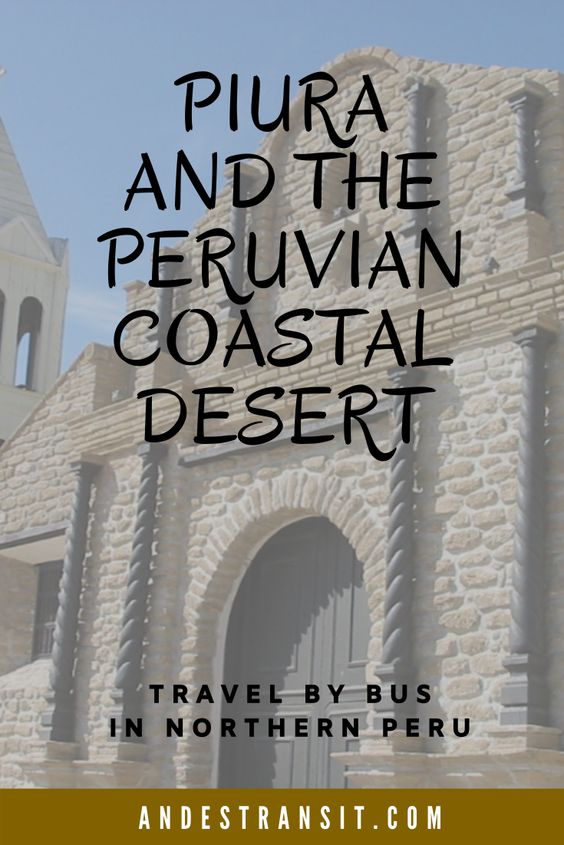