Becoming a Pisco Kid | Go Pisco Tasting in Peru in 2020

Several South American countries are world-famous for their wines. Chile and Argentina are chief among them. Peru, however, has its own ideas of how to peel a grape.  But wine in Peru is not the same as pisco in Peru! I was in Chachapoyas when my birthday was coming around. I decided I would give myself a great treat by packing a picnic lunch and head up to Levanto. Once there, I would visit the ruins of Yálape, then hike the 16-kilometer pre-Incan road back to Chachapoyas.

For a week, I asked people everywhere: “What is the best Peruvian wine?” I asked in restaurants, in shops, at hotels – even the tellers at the bank. Everyone said the same: a borgoño (burgundy) made by the country’s biggest winery. I finally found it in one of the supermarkets in town. At USD $14 per bottle, it was expensive comparatively speaking.

On the morning of my birthday, I awoke and packed the picnic lunch for my outing. I made a spread of local cheese, Kalamata-style olives, garlic, onion, and oregano, all of which I bought at Chachapoyas’ immense market. I prepared sandwiches and tossed it into my shoulder bag along with some fruit, water – and a small bottle filled with the borgoño.

Down at Chachapoyas’ main plaza, I took a colectivo (a shared taxi) up the mountain to Levanto. I strolled around that village for a while, and then visited the ruins at the edge of town, at the beginning of the ancient stone road. Before setting off on the downhill, 16-kilometer trek, I sat on the ridge to enjoy my picnic. The view was incredible, with the mountains folding away on either side.

I took a sip of the wine.

Immediately my tongue curled from the acidic tartness. Then the sickeningly sweet aftertaste hit my taste buds. Oh, my – and this is the best Peru has to offer in wine?!

As soon as I emerged from the stone path onto the highway, I hitched back to Chachapoyas. My payment to the driver and his friends was the rest of the wine in my bottle – a very welcomed gift on that Friday after work. When I got to my hostel, I gave the rest of the burgundy to the owner and her cleaning help.

Everyone was happy, except for me, for I was out the $14. At least it wasn’t as bad as the turpentine-like vino in Guatemala.

Honestly, the Chachapoyas experience wasn’t enough to turn me off from trying the wine again in Peru. After all, there are as many wineries as there are grapes. One afternoon I dined at El Viñedo in Arequipa (Calle San Francisco 319). I opted for its menu turístico, a moderately priced meal that includes a pisco sour aperitif, choice of appetizer, main course and dessert. For the main dish, I had the alpaca steak accompanied by a goblet of the house wine. Upon taking that first sip of the vino my eyes widened. Surely a wine this good has to be imported. Upon paying my bill, I asked where their house wine comes from. Valle de Majes was the reply.

The Majes Valley lies just west of Arequipa. This is home to this region's prime pisco and wine vintners. I’ll have to return again sometime to pay them a visit and try their products, perhaps during the Festival de Vendimia (Grape Harvest Festival), which is celebrated every year from February to April.

Still, if you happen to be in Peru, that doesn’t mean you can’t enjoy great fruit of the vine here!

Peru is most famous for pisco, also made from the grape.

Now that I had safely ruled out borgoño, I decided that when I’m in Peru, I would just have to limit my libations to beer or pisco, which is most often served as a sour cocktail, either as an appetizer to a Sunday blue plate special or as the brindis (toast) at art openings and literary readings.

To be fair, the grape brandy called pisco is made both in Peru and Chile. In fact, the two countries are still fighting in international court over who holds the rights to the name. Many viticulturists claim that the moniker for this liqueur came from Pisco, Peru, the port from which it frequently was shipped. Others claim it comes from the Quechua word that means a ceramic urn.

Several varieties of pisco exist, depending on the type of grape used. Pisco puro is distilled from non-fragrant grapes like quebranta. Pisco aromático is made from mosquetal, torontel or Italia grapes. A blend of several grapes is the base for pisco acholado. Mixing pisco with young wine gives you perfecto amor (tr: perfect love), a drink that feels as tame as adolescent love until you try to stand up after a few glasses! Moquegua is known for its crème liqueur, crema de pisco.

Pisco is used as the base for several cocktails, like the famous pisco sour, as well as the Tacna Sour, Bandera Mokewana, and the Machu Picchu. Peru celebrates International Pisco Sour Day on February 2. The wine harvest season is in February and March. At this time, the Vendimia Queen travels down the Ruta de Pisco, a celebrated route of vineyards, to ceremoniously stomp grapes. The city of Ica holds its Festival de la Vendimia in February.

Peru’s Ruta de Pisco includes the five departments (i.e., regions) where pisco is distilled: Lima, Ica, Moquegua, Tacna, and Arequipa. According to some Peruvians, Moquegua makes the finest pisco. In Arequipa Department, the Majes Valley is the place to head out to for a pisco day trip.

Many of the distilleries are family-run operations, often located far out in the countryside. Not all are open to the public, and many that are require a reservation. Some charge an entry fee. It is easiest to visit on an organized tour, especially from the cities of Ica, Moquegua or Arequipa. During the day, the bodegas cater to the tourist crowd, discussing the distillation process and serving up shots. Some also have restaurants where you can buffer your stomach for more than a mere sip of the liquor.

But at night the scene becomes more down-to-earth. The bodegas’ (wineries) cantinas open and the drinking, singing, and general drunken mayhem continues until the dawn. Locals highly recommend that foreigners stay away from these "festivities", as they can apparently get quite rough.

In the Ica region alone, 85 wineries produce pisco and other fruits of the vine. Most people go on tour, though it is possible to get to some of them on your own.

While at Huacachina, I decided to take the easy way out. I plunked USD $11 down and booked my place on a tour to the Ica bodegas.

The tour began early in the morning. We had much ground to cover.

First, we headed into Ica and then turned south to Cachina. For centuries, this out-of-the-way grove of huarango trees was used by African, Chinese and Romani as a place to hold their religious ceremonies, far from the prying eyes of the Spanish Inquisition which considered the ceremonies to be witchcraft. Many curanderos (shamans) still live in the neighborhood. Nearby is a rustic museum, but it doesn't have much on display. We also stopped at a seven-headed palm tree, said to be bewitched.

10 Fun and Free Things to Do in Lima

Piura and the Peruvian Coastal Desert

More than Mancora! Explore the North Coast of Peru

We then did a complete 180-degree turn, to the north, going to our next destination of Subtanjalla, a suburb north of Ica.

In this district are 60 bodegas! We stopped at Vista Alegra, only three kilometers from the city (Camino a Tingüina, Km 2.5). Since 1857, this winery has been making piscos and a variety of wines (Malbec, Pinot Blanc, Merlot, Tempranillo and Cabernet Sauvignon). We continued north to a turnoff 16 kilometers outside of Ica, at Kilometer 294.2 of the Panamericana Sur. Along this road are several more bodegas, including El Catador. We made our obligatory stop there, trying the piscos and homemade jams. Other tourists were jamming the restaurants of the other establishments on this side road.

Also along this road, opposite from the El Catador’s side road, is the pisco museum, Museo Lazo. At the end of the main road, 8 kilometers from the Pan American highway, is Tacama, Peru’s biggest and some say its finest winery. Unfortunately, our tour did not include either of these museums. We had one last stop before our day-long tour ended. We traveled south of Ica, to the Los Aguijes neighborhood where another two dozen or so bodegas operate. Our goal was Lovera, a bodega that has been making award-winning piscos and other liquors since 1867 (Panamericana Sur, Km 308, Garganto k-1, Los Aguijes). The guide took us through the process of making pisco.

After the grapes are stomped in large vats, they are placed in ceramic urns to ferment. Once fermentation ends, the juice is poured into gigantic copper stills, and the mixture is slow-cooked over huarango wood fires. The pisco rivulets through the long spout, passing through a tank of water to cool it down and drips out. The liquid is placed in casks and aged.

Our group then sat on tree-trunk benches and tried the variety of piscos Lovera makes, as well as its fruit-flavored crema de pisco.

Our day was then over, and we had become true-blue pisco kids. Upon returning to Huacachina, we stumbled out of the van, carefully protecting the bottles of pisco we each had bought. After a hearty meal, we could continue to imbibe in this fruit of Peruvian vines.

Getting around on your own

The advantage of guided tours is that you can cover more ground in a single day, and the cost was only USD $11 including most entry fees. However, you can also get to these locations by bus for even less cost, although not all of them in a single day.

To get to the pisco wineries around Ica on your own:

A taxi from Ica costs approximately USD $1.50 one way.

Take a mototaxi, which should cost a mere USD $1. Vista Alegre charges an entry fee.

From the second block of Calle Callao in Ica, take the “San Juan/Tres Esquinas” colectivo taxi ($1). Tell the driver you want to get off at the El Catador turn-off. About a kilometer down this road, on the right, is the side road to El Catador and several other bodegas. On the opposite side of that main road is Museo Lazo. Continuing to walk down the main road, you’ll arrive at the Tacama winery.

A taxi to Lovera and the Los Aguijes neighborhood costs USD $2.25 one way.

Lorraine Caputo is a travel writer, poet, and translator. She has authored 10 guidebooks for South America. Her literary works appear in over 1050 journals in Canada, the US, Latin America, Europe, Asia, Australia, and Africa; 18 anthologies and 12 chapbooks – including the collections of travel poetry, Caribbean Nights (Red Bird Chapbooks, 2014) and Notes from the Patagonia (dancing girl press, 2017). For several decades, she has been traveling through Latin America, listening to the voices of the pueblos and Earth. Follow her travels on Facebook. 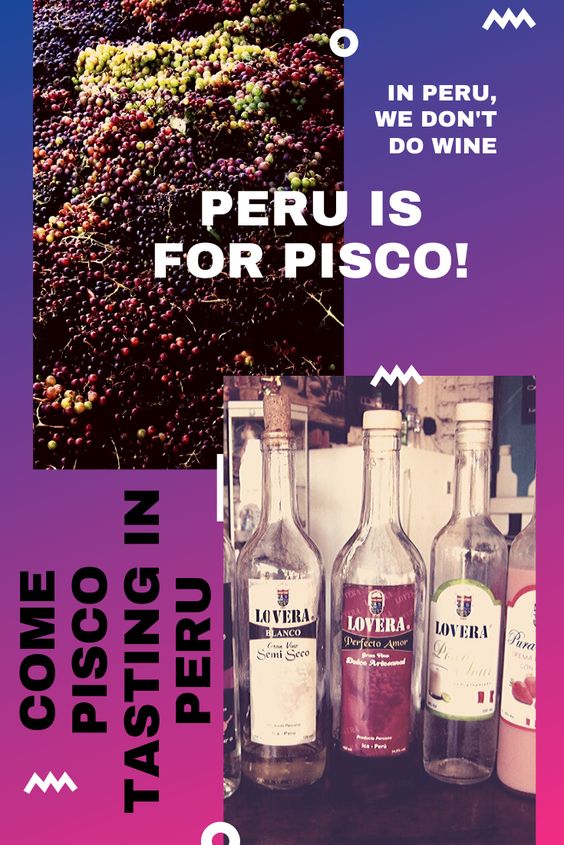