Things to do in and around Guayaquil | A 2020 Weekender's Guide

The vast majority of travelers arriving in Guayaquil hit the malecón, Las Peñas, and the Parque de las Iguanas. Then they spend the remainder of their time sitting around bored in their hotel, having run out of ideas of things to do in Guayaquil.

Oh oh oh, let me prevent you from the same fate, or better said, let me make your visit to Guayas, the province to which the city belongs, a great memory in your life! Yes, it's muggy, but not at all times of the year, and the humidity provides for things you can't experience elsewhere, so look at it as a golden opportunity.

Things to do in Guayaquil - City Side

For one, animals and plants adore "calor" (humidity), so stroll through the shady botanical garden of Guayaquil (jardín botánico), the entrance to which is on Francisco Orellana and Calle 24B in the very northern part of the city, far away from the noise. The garden is home to over 80 orchid species and hundreds more of other species of tropical and medicinal plants and trees, as well as 60 varieties of native birds, and 73 species of butterflies. Even closer to the center (in fact just across the river from the airport and bus terminal) is El Pantanal, Guayaquil's zoo and historical park that is a great choice for families that want a single place to see animals and replicas of the former eras of the city. If you're looking for some quieter indoor activities, Guayaquil has some worthwhile and stately museums. The alpha male is Museo Municipal on Calle Sucre between Chile and Pedro Carbo, which also serves as Guayaquil's major cultural center offering film festivals and workshops.

The Museo Nahim Isaias Barquet on the corners of Pichincha and Ballen specializes in religious art collections. And as long as you're walking on the malecón, the newer section of it on the north end will lead you around to a more tranquil section in which you'll encounter the Museo Julio Jaramillo, which mostly pays homage to the legendary Guayaquileño singer by the same name, but also to several other Latin American musicians of the same era. There are several other museums, in fact, three new ones added since 2013, from history to anthropology to music, so feel free to inquire in town depending on your theme of interest.

East of the Río Guayas 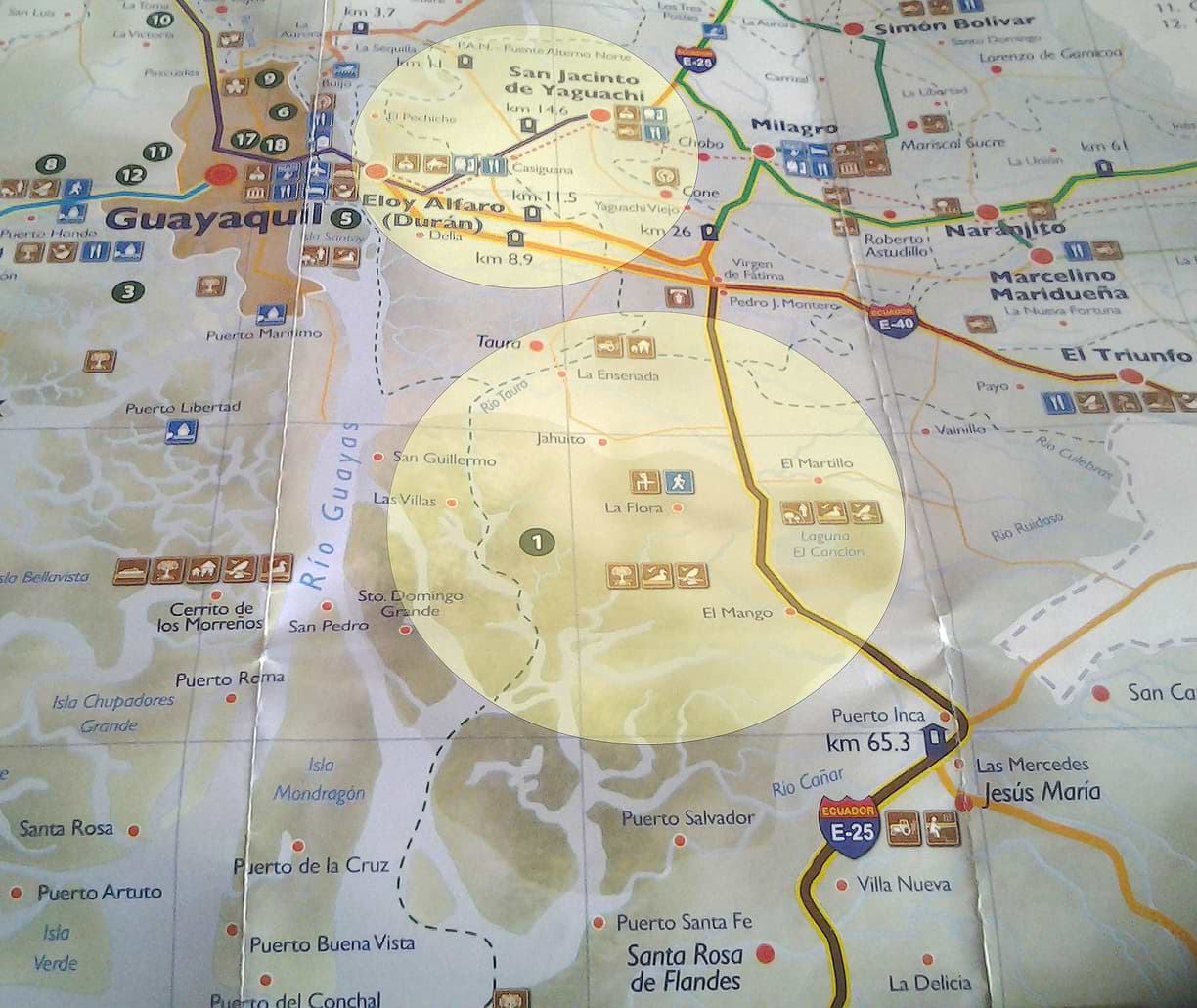 There are two day-trip favorites easy to reach by going across the bridge from the city. The first is the Durán-Naranjito train (upper circle, left), a wonderful round-trip excursion that takes you on the newly refurbished railway from the station in Durán through the wetlands thick with birdlife, to Yaguachi, one of the oldest shrines in Ecuador, and on to Naranjito where you will be greeted with traditional dancing. You can reserve tickets online or take your chances and show up at the station if you're feeling spontaneous. See my related article for more details, "Birds and Iguanas by Bus". If however, walking suits you more than riding, head out to Reserva Ecológica Manglares Churute, a terrific set of nature trails that you can best start on from the visitor's center located on the main highway E-25 near El Martillo. Any bus going from Guayaquil to Machala can let you off there.

The reserve is dominated by mangrove swamps, so trekking around by rented boats is a common option. But, there are several marked walking trails that take you to lagoons, lookouts, and let you see up and close one of the last remaining stands of native coastal mangrove and all the habitat that enjoys it, including howler monkeys and pink dolphins. 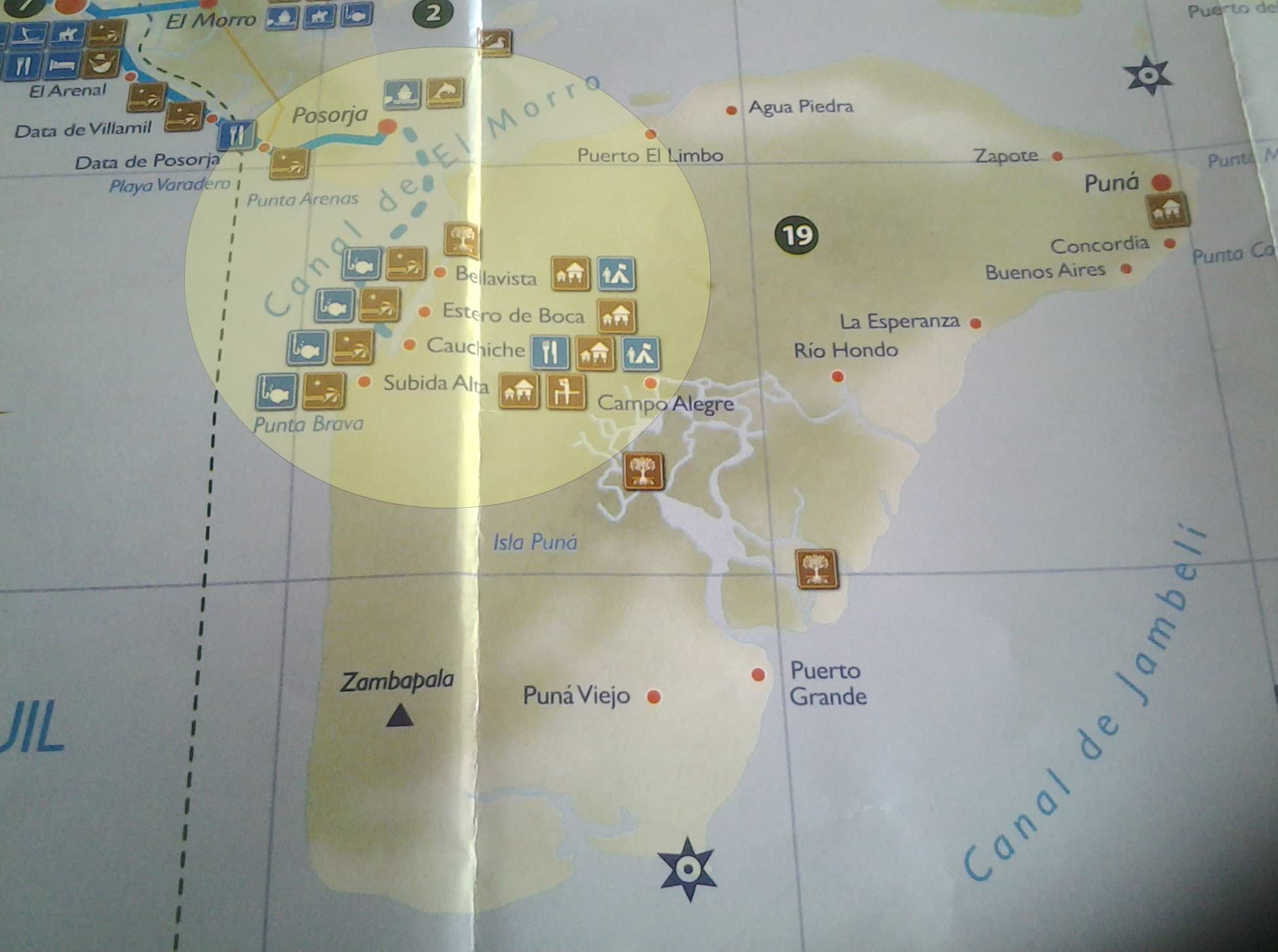 To the south of the city, standing between the Golfo de Guayaquil and the calmer Estero Salado (a natural canal), is the wilderness island Puná. Here is your destination if you want to pack some camping gear and separate yourself from the mainlanders to truly get away from it all, while still being relatively close to the city. The island boasts several campgrounds and fishing areas, rustic as they may be, and some limited services, as well as community-based tourism hosted by indigenous families of the island. The island has no roads, so once you land on it, you and your feet have it all to yourself (well, okay, and other campers too) to experience its unspoiled beauty. To get there, you have to take a bus from Guayaquil to Posorja, a small but quaint town at the end of the road past Playas. At the pier, there are small individual fishing boats that can be hired to transport you over the canal to the Cauchiche beach on the island, which has one campground of its own. From there you can trek on foot to any of the closeby campgrounds up and down the seashore, or even inland to what are more formal campgrounds.

Check with the locals if you are interested in hiking to the more "lost cities" or remote parts of the island like Puná Viejo, or the island's tallest point, a small mountain called Zambapala. 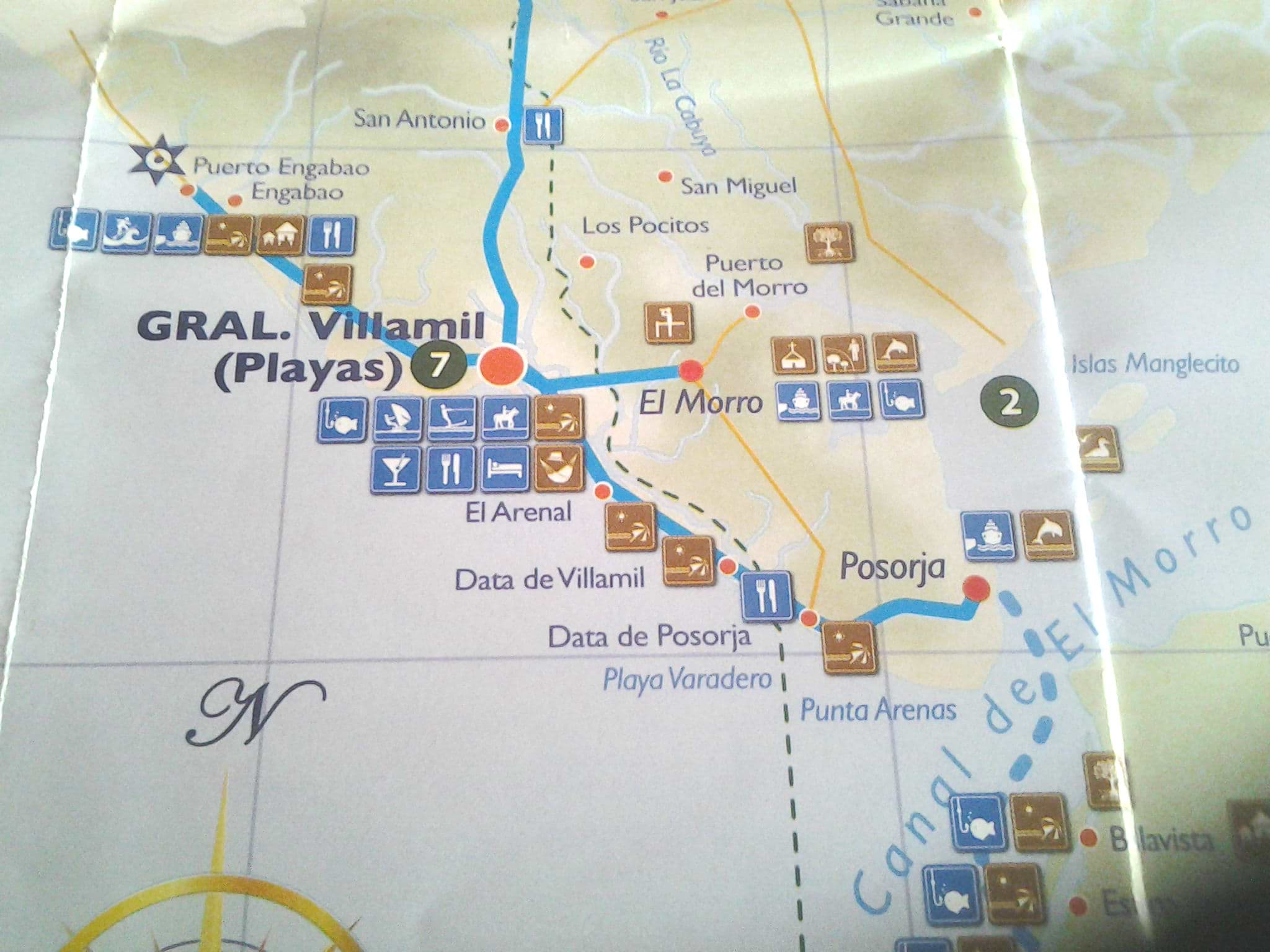 Now just to be clear, I'm not talking about Montañita, Puerto López, or the Sun Route here. That's far away more than "outside Guayaquil." Many travelers don't realize you don't need to go that far to get to great beach fun and even small fishing villages that provide a cultural counterpoint to the big city.

Playas (formal name General Villamilil) is the central hub for the beach coast that city dwellers run to on the weekend, not even needing to spend the night there as they can get back to Guayaquil in less than two hours. Playas is replete with high-rise hotels, apartment rentals, seafood bars and night clubs, and beach clubs.  The sand and water aren't as glorious as what you'll find out on the Pacific coast, but they meet all the normal expectations for swimming and playing. Buses go from Guayaquil to Playas on a generous schedule, so you can pretty much play it by ear.

Further down the road from Playas is Posorja, which is the launching point to the Isla Puná (see the section above). Posorja is an eccentric town (bigger than a village, really), but without hotels.  They seem to like it that way. The pier has a nice boardwalk, the streets are safe, and there's an outdoor market. The hippie vibe of the town is a great reason to just take the 30-minute bus ride there if you find Playas a little too crowded and wired.

Going the other way from Playas, I recommend walking up the sandy roads to Engabao, a small fishing village that stands still in time and the surf is great there for boarding as well as having a decent beach.

Now, if you find yourself in Playas and not really needing or wanting to return to Guayaquil, the province of Santa Elena is just a stone's throw away, and in it there are even more cool adventures like the burial tomb of two mummified lovers (los amantes), the salt flats of Anconcito, the archaeological grounds of El Alto, and of course the high-style city of Salinas at the westernmost point of continental Ecuador!

Kali Kucera is President of AndesTransit and also known as "the bus guy" for his adventures across South America by bus. He is a co-author of "South America Borders" and "365 Days of South American Festivals." 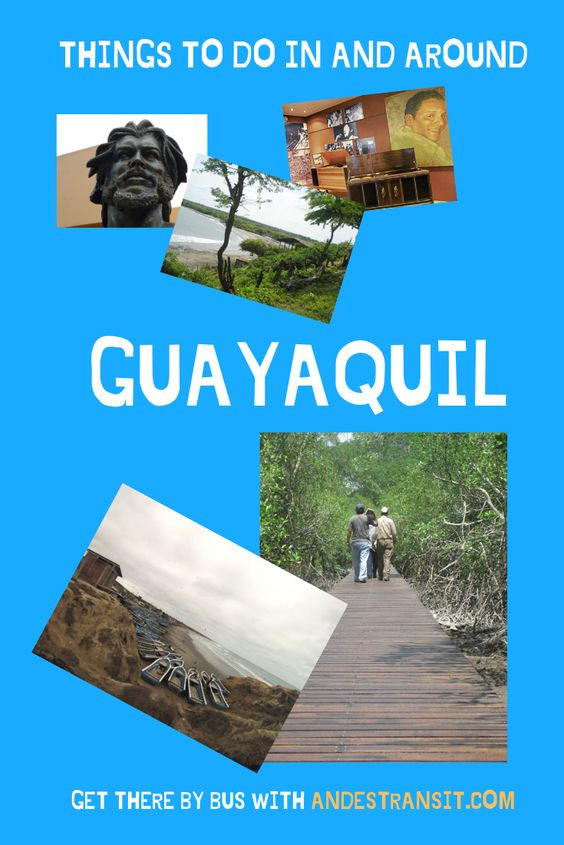