I had been to Ecuador seven times, and each time a certain word was whispered in some room or another where my ear could barely grab a hold of it before it hushed away. The word was "Zaruma". Some day, I thought, I would find out the meaning of the word if it was so important. 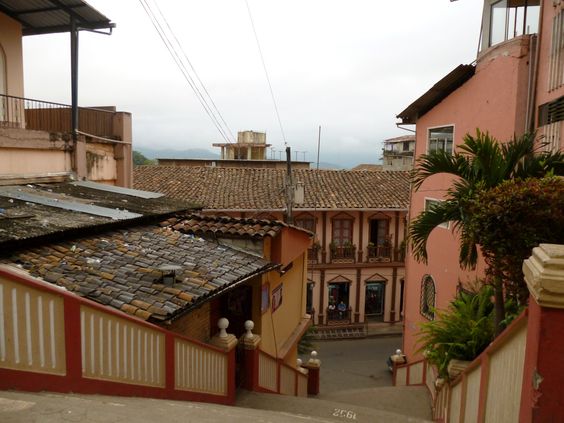 Finally, I decided to investigate the meaning of Zaruma and why it kept haunting me. It turns out that Zaruma is truly the fabled city on a hill. It is not on the way to anything, and yet it’s only a couple hours from Santa Rosa and Machala.

Some history behind Zaruma

For hundreds of years, Zaruma has perched above Ecuador’s richest gold deposits, and thus became the lust of prospectors from France, England, Spain, and Italy. Each brought their families and cultures with them, giving the small town a schizophrenic feel where the layers of European and native Ecuadorian influences continue to stick their head out on every street corner.

It is also the only city in Ecuador whose architecture is dominantly made from wood. I couldn’t decide if I was in Ketchikan, Alaska, San Francisco, California, or Prague, Czech Republic. Zaruma is an exotic blend of various places and the people representing them, all intoxicated in their own way by the dream of gold.

Hidden in the Andes

Despite the hills and jagged sidewalks that can suddenly drop off a cliff if you’re not watching where you step, Zaruma is actually a very compact and walkable city with lots to see at every turn.

Ecuador declared it a national heritage in 1990 and nominated it as a UNESCO world heritage site in 1998.  That explains a bit why the town is not allowed to expand or change much at all, despite the growing number of people that want to move there because of its excellent climate and quality of life. 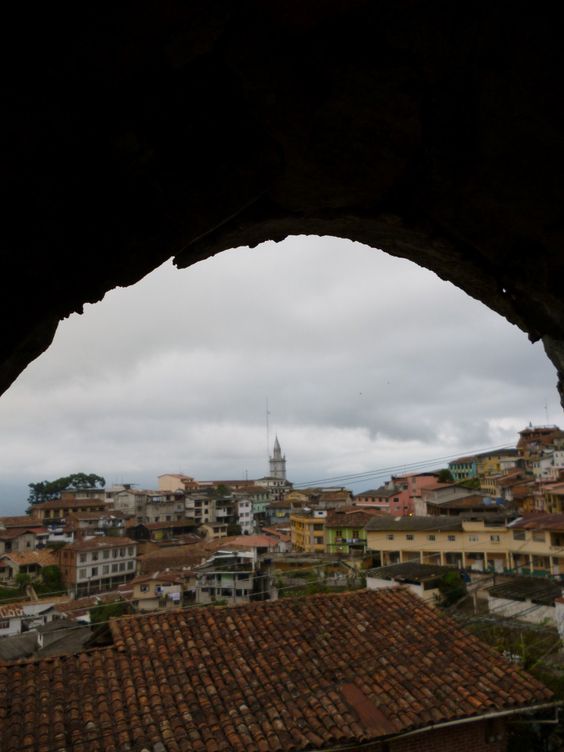 How to get there?

Now, because I’m a bit stubborn, I didn’t get there the easy way but through a stunning wilderness back road from Las Chinchas.

However, most travelers come by bus from the west (Santa Rosa, Machala, Guayaquil), either by going direct to Zaruma or to Portovelo, at the base of Zaruma’s mountain and then take another bus from there up the hill.

I ended up spending a lot of time with an Italian-Zaruman restauranteur who grows his own coffee across the valley from the mountain, as well as runs his own pharmacy in town. But no matter where you turn, you will easily find the citizens of Zaruma ready to pass the time with you and encourage you to explore. 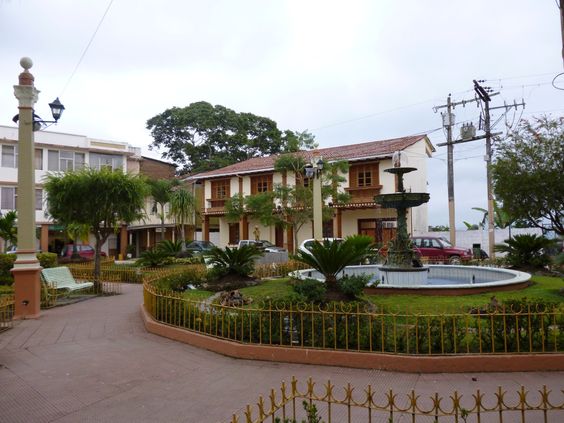 I skipped the main attraction, the Sexto Mine and Museum, and instead chose to go hunting for a hummingbird park in nearby Piñas, which depending on the bus company you board as they take different roads and stops, is between 30 minutes and 55 minutes away from Zaruma.

It turned out no one in Piñas knew of the hummingbird park, and the tourism office was closed (despite it being the middle of the morning in the middle of the week). So one taxi driver claimed he knew of it, and in an instant, we were headed west. However, Piñas is just a small town too, so after 10 minutes of driving, I really didn’t understand how it could be so far away. I enquired of the driver, who then shook his head in confusion, having thought I was referring to the Buenaventura forest, which is about 30 minutes further west of Piñas.

I decided not to change course and just told the driver to go on ahead and take me to where he thought I would enjoy seeing hummingbirds.

When we reached the entrance to Buenaventura (tr: Good adventure!), the driver turned off the road and went down a mountain valley road, way into the forest, so I was actually glad I didn’t try this one on a bus, as I would have been in a for a long hike.

Once to the Buenaventura lodge, I walked into a large open cabana completely saturated by hummingbirds, flying back and forth around my head from one feeder to another. It satisfied all my hopes for sighting just a few hummingbirds over the course of a whole day, in one minute.

But there was more. Buenaventura is an ecological reserve protecting many rare and endangered species that live only in this small biodiverse forest.

The park administrator gave me a walking stick and pointed me down the road where I could find a trailhead, down which I could hopefully spot even more birds like the rare Long-wattled Umbrellabird, or the Esmerald-bellied Woodnymph, or a couple of variety of toucans. 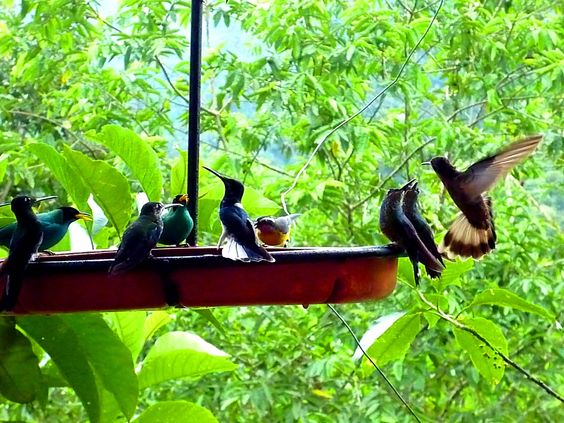 The stick wasn’t just for walking.

He told me I should use it to lift big leaves in my path to make sure there weren’t any snakes hiding underneath!

Unfortunately, I’m not good at bird locating, and the most I saw was some toucans, but the journey through the forest was indeed beautiful and I returned to the lodge after about two hours to enjoy the hummingbirds again.

An unusual ride to Zaruma

The administrator actually lives in Zaruma and was on his way home, so in this case, I didn’t need the bus.  However, there are a number of them passing by at the park entrance, so all I would have needed was a ride back to the main highway and there are several folks there at the lodge ready to do just that.

If you have any knee conditions, I would not recommend Zaruma. I don’t think there’s a flat place in the city except at the very top of the hill where you can find a tranquil town park surrounded by little restaurants, hotels, and one of the most captivatingly beautiful wooden churches you will ever lay your eyes on.

Things to do around Zaruma

These highlights are just a few of the many possibilities in and around Zaruma to explore. There are great natural swimming spots in the nearby Pindo River, hikes up in the Chillas cordillera, museums in Zaruma, Portovelo, and Piñas, and opportunities to see the mining actively at work today. 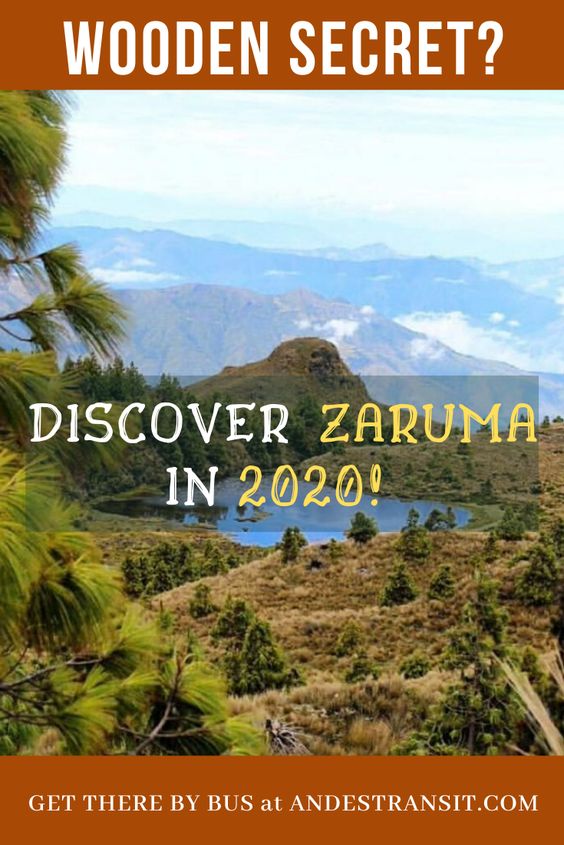 Bus from Lima to Arequipa

Bus from Trujillo to Lima

Bus from La Paz to Copacabana

Bus from Baranquilla to Cartagena

Bus from Santa Marta to Cartagena

Bus from Quito a Cuenca