An Alternative to the Galapagos | Birds and Iguanas by Bus?

Sure, why not! Let’s put it even more dramatically:

Wait a minute, how do you figure? You may ask. If what you’re looking for is to see some wildlife on a tight time and money budget, you don’t even need to spend money on a hotel in Guayaquil. There are an amazing couple of things I found you can do in a single day-trip and then be back to the bus terminal by dusk to other amazing places in Ecuador.

My friend and I got a pair of tickets for a free weekend stay in Puerto López, so we got on a night bus from Quito to Guayaquil. There's also the option to ride directly from Quito to Puerto Lopez, but if you want to explore Ecuador's largest and most exotic city, keep reading.

Waking up to the adventure

By morning, we woke up in Guayaquil. However, our plan was not to get off in Guayaquil, but the suburb immediately before it, Durán, which has its own smaller terminal and is actually a handy and quieter alternative to the monstrosity of the Guayaquil terminal.

Durán, especially in the morning, doesn’t have much to offer, but all we needed was to get to the Durán train station, which from the bus terminal is a $3 cab ride, but if you’re in less a rush, you can also board the city buses right out in front of the terminal for a fraction of that cost, and just ask them to let you off near the train station.

Ecuador's train: a trip to the past (including birds)

Update: Train operations have been suspended by the national government as the company is currently looking for investors to take on the project. There is no official notice on when train tours and tickets will be available again.

Over the past couple of years, Ecuador’s tourism and transportation ministries have invested a lot of money to revive their railways, which offer not only convenience but also access to incredible places and the scenery around it. You may be familiar with the drama of the extent to which people will go to make train routes possible, made famous in the filming of Werner Herzog’s Fitzcarraldo. But the result is that today, the Ecuadorean stations are clean, bright, and beautiful, and the trains themselves combine both the charm of antiquity with modern comfort. The Durán station has a more pared-down purpose compared to its former days, and now simply gives passengers a four-hour round-trip through the sugar cane wetlands up to San Jacinto de Yaguachi, Milagro, and Naranjito. You can also check EcuadorTrains to find more routes. In truth, we got to the train station an hour too early, so we had to sit around on our backpacks at the gate waiting for it to open, but luckily there were little cafés opening across the street for breakfast, which in these parts consists of coffee, soup, sandwiches, rice, pretty much the same thing you get for lunch.

Perks of riding the train: wildlife and history

The price of the train ticket included a bilingual guide who effused about the train’s history and apologized a bit too much about the slums we passed through getting out of Durán, but he also took time to visit each passenger and answer our questions as the train rolled along.

Still, the most amazing thing we did not expect to get out of the trip had nothing to do with steam engines, rail history, or backwater encounters with Ecuadorian poverty.

Who would think that a simple train trip on the outskirts of Guayaquil would be an ornithologist’s dream? But to tell you the truth, these flatlands covered with rice paddies interrupted by woodlands are the perfect heaven for so many avian species, that we gave up counting. The best part was the train’s comfort and it’s relatively slow-moving pace did all the hiking for our legs, and whatever we might have missed on the way up we could get another chance to spot on the way back! We were only sorry that we didn’t bring binoculars, but fortunately, some other local Ecuadorian passengers did and were really kind to share the pleasure.

Sure, most of the birds you will see between Durán and Yaguachi are not the kind you will see in the islands, of course. But the volume and variety I would put up for competition with Galapagos in a second, and you don’t have to spend gobs of money, time, or get wet to do it!

San Antonio de Yaguachi itself is one of the oldest towns in the province and offers a pleasant opportunity to get out, stretch your legs walking up the riverbank, getting some ice cream underneath the hot sun, and visiting the cathedral which is a popular shrine in the area and a point of pilgrimage. If you want to discover more about Yaguachi, there are several attractions as well as cultural activities you can find here.

After about an hour rest in Yaguachi, the train was ready to continue to Naranjito and then return. We were back along the same track to Durán, but of course, getting to see the view of the opposite direction.

The day wasn't over

With less than half daylight spent by the time we got back to Durán, we still had plenty of time for our next “budget safari” in downtown Guayaquil.

To do that, we got ourselves back to the Durán terminal with a cab ($3), then boarded any one of a variety of buses there that traverse across the bridge to the Guayaquil terminal ($1.50), and from the Guayaquil terminal, all you need to do is walk over the pedestrian overpass to the Guayaquil Metrovia, the city’s mass transit system, where for 25 cents you can ride straight downtown. We asked an attendant there on the platform to point us to which line to stand in to get to the Cathedral or the Malecón, both of which are the most visited areas of Guayaquil for both residents and tourists, so it’s pretty much a matter of following the crowd at that point.

Right there in front of the Cathedral is a great and happy diversion, Parque Seminario, or as it is more commonly known, Park of the Iguanas.

As the common name implies, this small and stately park is home to dozens of iguanas that descend from the trees and roam the grounds. They are rather intimidating with their looks, but they have become quite accustomed to people sitting right next to them and don’t bother you at all. Some of them bathe in the sun on the sidewalk, while others slither through the grass or hang from branches, but all will allow you to come up and close to take a look. This is not a zoo, there are no cages or bars between you and the animals, but we had to watch our step as both humans and reptiles like to walk in the same places!

After some photo ops with our prehistoric friends, we wandered off to get a pair of treats that don’t get any better outside of Guayaquil: a sanduche pernil (pork sandwich) and batido (fruit smoothie). You’ll find small stands for both or either scattered all around downtown Guayaquil, so just wander until your stomach calls you. We then still had plenty of time to catch the Metrovia back to the Guayaquil terminal to be on our way before sunset. Our initial plan was to get to Puerto Lopez, but you can also connect from Guayaquil to Cuenca (great destination if you are looking for museums and perfect weather), Manta (Ecuador's largest port and cruise destination), Banos (The capital of adventure tourism) or even further south to Mancora (Read more about Peru's surf capital here).

Naturally, if you’re in Guayaquil already from having flown there, this little trek is going to be that much faster and cheaper, and there are even more day trips and things to see inside and around the city. So while I don’t want to minimize the Galapagos, for us backpackers who want to see a lot of ground with a limited amount of time and money, I found this trip to be exactly the kind of thing that you can get just as much emotional satisfaction from for a fraction of a Galapagos price tag.

Who's got the Inca beat now?

Kali Kucera is President of AndesTransit and also known as "the bus guy" for his adventures across South America by bus. He is the co-author of "South America Borders" and "365 Days of South American Festivals." 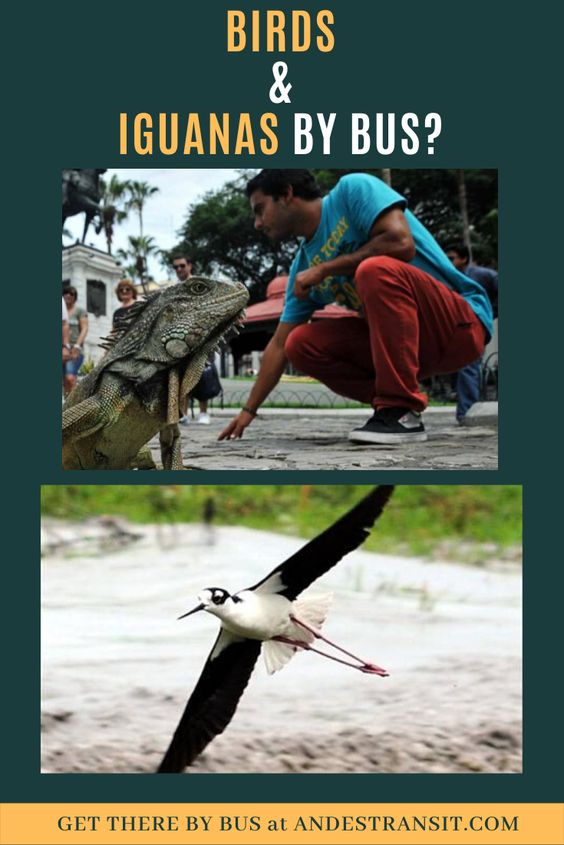