Barichara the Florence of Colombia 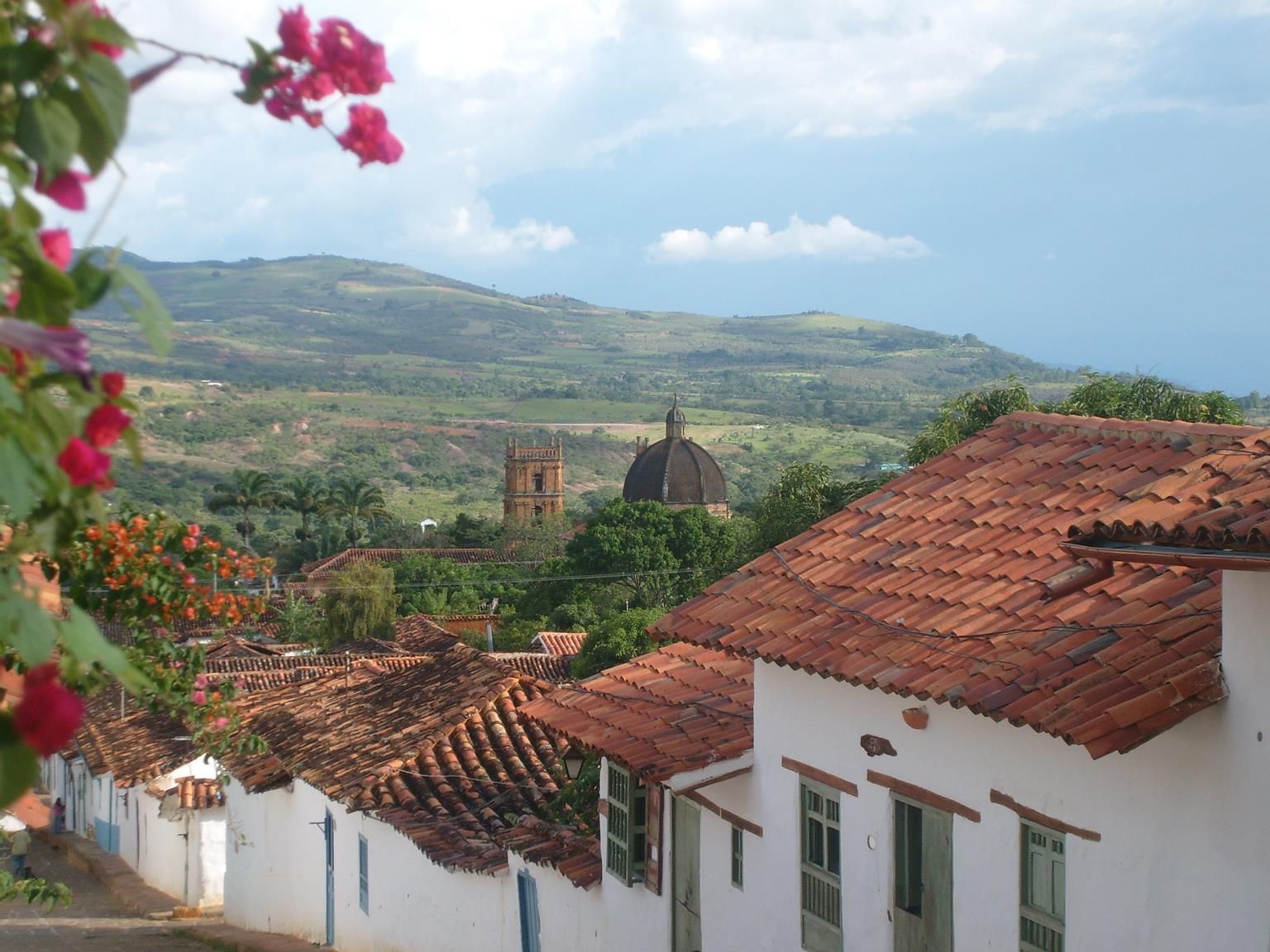 When Kali, our bus meister of South America, suggested I "go get lost" in the mountains of Colombia, I thought he was firing me. So I told him to go jump in a lake, and he said he would have a hard time deciding which one, there are so many beautiful ones to write about.

"Ah!" That's when I got it. My mission was to find some lovely buried mountain treasure and tell you all about it. This would be an equally difficult decision, but I knew it would have to be Barichara at the end of my deliberation.

There are so many picturesque Colombian towns. The whole Colombian sierra is intoxicating and luscious, like a necklace of emeralds. But to me, the clear king of them all is Barichara, and here's why.

Granted, getting to Barichara from Bogotá is almost a nine-hour chore, where you first arrive to San Gil (I'll talk about it later) by bus, then you get on smaller buses by the bridge which takes about another 45 minutes west into more mountains to get to Barichara. But I've been on much longer and much more boring bus rides than that, so I wasn't really tired. In fact, I was filled with awe.

The better way to go is all ticketable online and that is through Bucaramanga, no matter where you're starting from.  Just go to AndesTransit.com and enter your starting point but mark your destination to San Gil, and then make sure you look at the results that go through Bucaramanga, and those are the seats you can reserve all in advance. Barichara reminded me of Florence, Italy. Stately. Noble. Architecturally exquisite and perfectly proportioned to its environment. Attention is given to the feeling of place, not just to buildings and streets.

The climate is sublime, sitting on a mountain ridge above the more humid forest such that you get light breezes mixed with warmth, but not intense heat. People were playing chess in the park under large leafy trees — how charming is that! Across the street from the park were a couple of shops with high-quality ice cream and chocolate, and here so far from any urban centers. I instantly wanted to stay forever.

The town is built on the side of a hill, so you're either walking up or down, but what this does is create incredible views of the colonial housetops or the sweeping valleys from the top of the ridge at a quirky but beautiful park that has several water features and modern art. If you love colonial architecture, Barichara is well recognized as being the best to preserve it in all of Colombia, and you'll see why. From simple homes with their beautifully painted wooden doors to the grand old churches in town like the massive Catedral de Concepción Immaculada to the more rustic orange-hued Iglesia Santa Bárbara on the north side of the village, or the small and humble meditative chapels like the 1831 San Antonio or the Jesús Resucitado. You will find many such masterpieces all packed in such a small town.

Barichara also has a significant role in the presidential history of the country, as it was home to Colombia's 11th president, Alquileo Parrera. You can visit his very small and modest home that also doubles now as a cooperative for weavers. After a truly peaceful night's rest, we headed back up to the ridge to begin the walk back down the other side of the mountain on a centuries-old Spanish stone trail called Camino Real. It's a sweet two-hour downhill hike passing streams and pastures with cows and small farmhouses. At the end of the trail is Guane, a tiny little town that is always ready to welcome hikers with a good meal and a few craft shops. The really nice thing is they are served by shuttle buses that will take you back uphill to Barichara if you don't want to hike the same trail again going up!

Barichara is also blessed with one of the few public clean and non-chlorinated swimming pools found anywhere, and after a good deal of walking and hiking, this felt so sweet and healthy to relax in for a swim.

Enjoy these other articles:

Mompox, the Fantasy Island of Yesteryear

Toodle on to Tolu San Gil (I promised I would get back to talking about it) is the capital for adventure sports in the Colombian sierra. Here you can go paragliding, river rafting, rappelling, spelunking, mountain biking, zip-lining (do you want me to stop already?), and all kinds of other adventures that have outfitters right there in town.

We opted to go hang gliding but were so bummed when the outfitter told us a rainstorm was coming through the valley, making it too dangerous. So we opted to have a little bit of water fun instead, and nearby there are a few balnearios, which are water parks but more natural in that instead of concrete, they make use of natural cliffsides, waterfalls, and pools. On the other side of the highway is the truly beautiful walking park/botanical garden El Gallineral, featuring endemic species of flora, huge trees with hanging vines, and even a swimming pool to boot. Going further north there are two other destinations, both of which you may go through if you follow my bus recommendations that I myself failed to take.

One is Girón, another beautifully preserved town that's a bit busier and touristed than Barichara because it's closer to the big city of Bucaramanga, just less than 15 minutes away. Then there is Bucaramanga itself, which aside from being an important transportation hub to all other parts of Colombia and THE epicenter for dining on the regional delicacy hormigas culonas (giant ants!!), there's not much to do or see. You can also pick up some good cigars in Bucaramanga but in my opinion, they are not as good as the ones in Duitama farther south near Tunja. (Yes, good girls smoke cigars too!)

If you're really in a hurry to get to Barichara, you can always fly to Bucaramanga, then bus south into the mountains, as this will shave a few hours if not more to your bus trip. But God forbid they should ever build a commercial airport nearer to Barichara, as that would just ruin my emerald necklace! Leave Colombia pure and worth the wait, I say. Right?

Emilie Velastegui is a travel writer and researcher. When not traveling and writing, she helps mostly foreign universities coordinate field research in biology and social studies. She also frequently heads off to Eastern Ecuador, Peru, and Brazil, where she says "the snakes are radically cool." 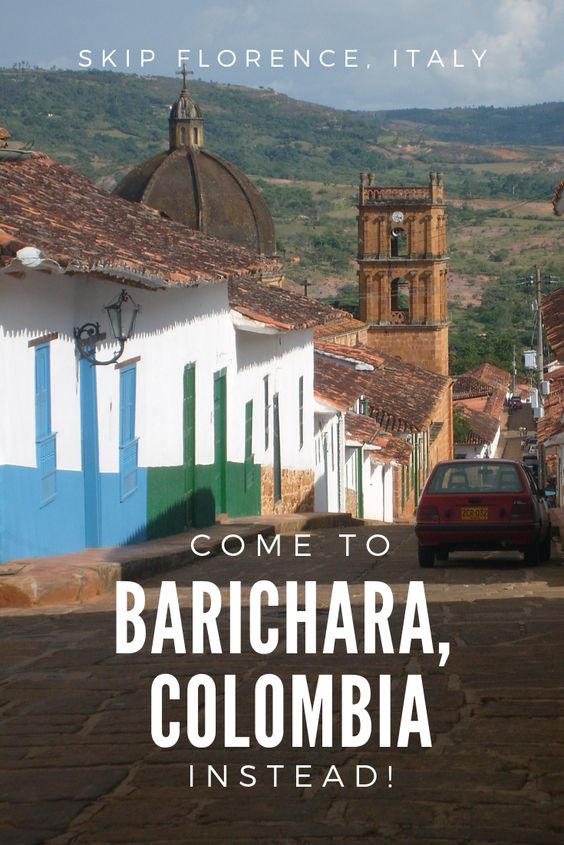