7 Places to Go Camping in the Argentine Patagonia in 2020

It’s nigh on spring in the Southern Hemisphere, which means it’s the season for camping in Patagonia!

And one of the best countries for camping is Argentina!

Argentina has a camping culture. It is Argentinians’ favorite way to spend their summer vacations, and you will see families loaded down with tents, folding chairs, coolers and all manner of supplies, making a beeline from the bus terminals and train stations directly to campgrounds. Be forewarned though: In summer, Argentine campgrounds can be über-crowded.

One benefit of camping is that after a week of sleeping on Mother Earth, you’ll feel the tensions of “civilized life” melt away. You’ll feel more relaxed and more balanced, and your posture will improve.

Another is the savings. Many municipal campgrounds are free! If you have to pay for camping, the cost is on average $4-6 per night, significant savings over even a bed in a hostel dorm! In fact, in one week you’ll have your tent paid for from the savings on the cost of lodging!

Even many small towns have a municipal campsite. Most compounds run by unions are open to the general public. Services are excellent. Sites often have barbecue grills, picnic tables and bathhouses with hot water.

If you aren’t up for camping, then hostels (hostal, albergue) are an option. Many have dorms and private rooms and offer cooking facilities to their guests (see the Associations section below for more information). Another option for budget travelers is hospedajes, which are small, family-run inns. Check with the local tourism office for a list of these.

The best time to enjoy the tranquility that camping offers is in the low seasons: Spring and Fall. Campgrounds are less congested and prices are lower, especially for back-up lodging options like hostels, hospedajes, and apartments. This is particularly true in Patagonia where summertime prices put a strain on lean budgets.

Let's look at seven great towns and their related campgrounds that are south of the Tren Patagónico rail line, which you can take from Viedma to Bariloche or the other way from Bariloche to Viedma. Two main national routes cut north-south through Argentina’s Patagonia: Ruta 40 along the Andes, and Ruta 3 along the Atlantic seaboard.

Ruta Nacional 40 edges the eastern slopes of the Andes. This is Argentina’s mythical highway, comparable to the US’ famed Route 66. It begins at the Bolivian border and stretches over 5,000 kilometers to the Magellan Strait. Traversing the road through Patagonia is difficult in winter, but buses do run year-round to these destinations 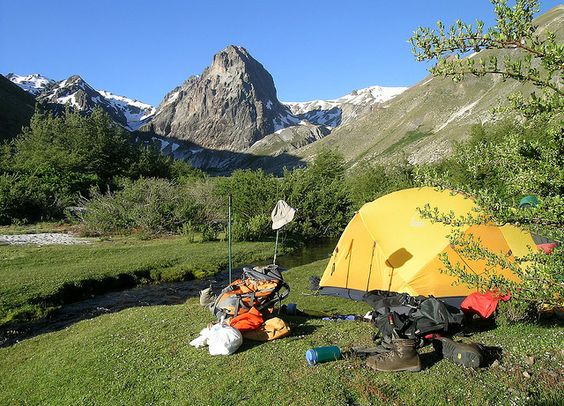 El Bolsón is Argentina’s “Hippieville.” Famous for its alternative music and crafts scenes, it also offers microbreweries, and museums like Museo de Piedras Patagónicas (Museum of Patagonian Rocks). Hike up Cerro Piltriquitrón to see the carved forest of mythical beings, or head to nearby Parque Nacional Lago Puelo for hiking, swimming, and other outdoor sports. Other activities include kayaking, rafting, skiing and fly fishing. Be forewarned: the hills are alive with duendes (elves)!

Camping: Dozens of private campgrounds in and outside of town; several hostels also have campsites. Camping also in Lago Puelo National Park and refuges along some of the other hiking circuits. El Bolsón has dozens of hostels as well.

A great departure point to get to El Bolson by bus is from Bariloche. 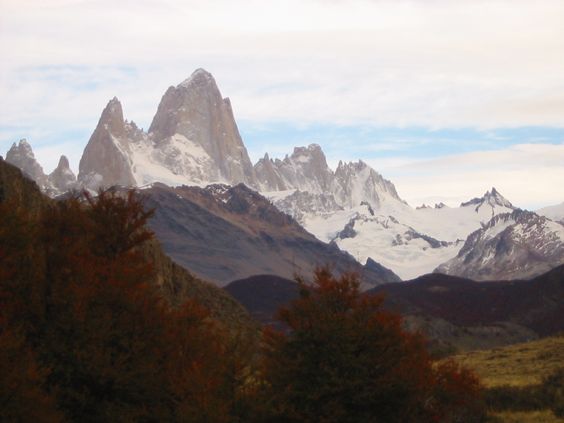 El Chaltén is a new town, established in 1985 during the Chile-Argentina border dispute, thus assuring Argentina’s claim to this corner of the Andes. This northern gateway to Parque Nacional Los Glaciares is shadowed by a stunning saw-tooth range that challenges the most experienced climbers. El Chaltén is the National Trekking Capital, with 18 trails ranging from several hours to several days; some are habilitated during the winter for snowshoeing, ice climbing and other winter sports. 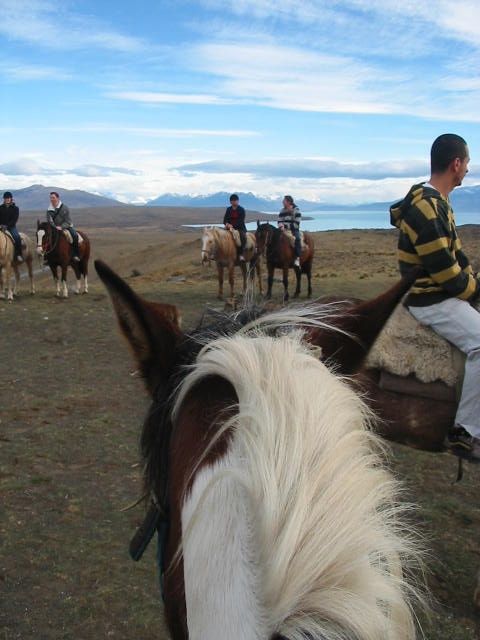 El Calafate, on the shores of Lago Argentino, is the southern gateway into Parque Nacional Los Glaciares. It is much more touristy than El Chaltén. The big draw is Perito Moreno Glacier. Other attractions are horseback riding, hiking, fishing, birdwatching, bicycling and several museums. Near to town are the Cueva del Waliche archeological site and La Leona petrified forest. El Calafate has a wide variety of culinary choices for every palate.

Camping: Campgrounds are open only October to mid-April; these are Amsa, El Ovejero, Jorgito, and Vial. Most are located along the estuary on the town’s east side. There are two campgrounds at Lago Roca, on the way to the national park, too. You’ll also find numerous hostels and other lodging.

RN 3 is the major Patagonian highway, with good bus service year-round. In the high season, more transport runs to the many interesting towns and national parks along its 3,000-mile stretch from Buenos Aires to Tierra del Fuego. 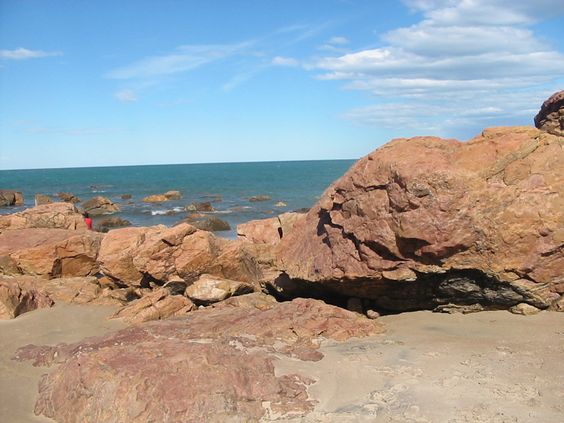 Located midway between Viedma’s train depot and Puerto Madryn, Las Grutas is a super-popular resort on the Atlantic seaboard. This is the warmest sea in Patagonia, with miles of beach to explore. It is on the migratory route of birds and whales. Take an excursion to the salt desert to stargaze.

Camping: Over a dozen campgrounds operate in Las Grutas; about half are open year-round. Other options are hostels, hotels and apartments. Lodging is much cheaper in the off-season, though most are closed June – July.

Get to Las Grutas by bus from Buenos Aires, easy! 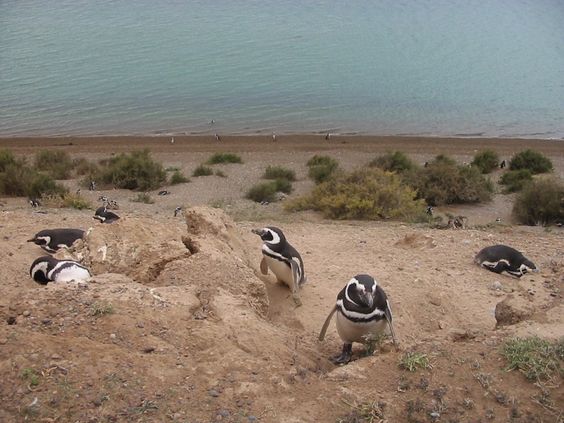 Puerto Madryn attracts thousands of visitors from June to December when the whales come to have their young. But other wildlife may be visited at the national reserve on Península Valdés, home to whales, penguins, elephant seals and sea lions. Scuba diving, kayaking, and windsurfing are popular watersports. The town also has several excellent nature museums, Museo Oceanográfico y de Ciencias Naturales and the Ecocentro, as well as Punta Cuevas, where the Welsh settlement of Patagonia began. Puerto Madryn is a good base for visiting other Cymric towns, like Trelew and Gaiman, to have an afternoon tea.

Related article: Puerto Madryn, with its abundant wildlife, is one of the places you can Go Wild In Argentina!

Camping: Two campgrounds on the south side of town: ACA (open all year; also has dorms) and Luz and Fuerza (open only in summer). There is also municipal camping in Puerto Pirámides on Península Valdés (open year-round). Other budget options are scores of hostels; reservations required in summer.

Click here to reserve your seat for bus departures from Buenos Aires to Puerto Madryn. 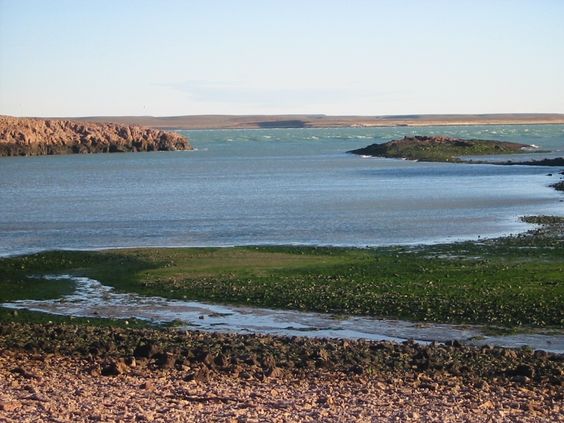 Puerto Deseado, in southern Patagonia, is another nature lover’s lure offering the Atlantic Patagonian coast’s greatest biodiversity. Within walking distance of town is the Ría Deseada nature reserve, featuring multitudes of wildlife, including fur seals, sea lions, dolphins, guanaco, rhea, five species of cormorants and two of penguins. The third variety of penguin – the Rockhopper – lives on an island nature reserve at the mouth of the bay. Kayak up the ría to Miradores de Darwin, a land that struck the famed naturalist’s fancy, or trek along the coast, go fishing or ride horses. Of the town’s several museums, the most fascinating is the Mario Brozoski marine archaeology museum.

Related article: Puerto Deseado, with its abundant wildlife, is one of the places you can Go Wild In Argentina!

Camping: Municipal campground in town; Camping Vial Cañadón Giménez, with windbreaks (2 kilometers along the road to the reserve). The only other lodging option in Puerto Deseado is hotels. 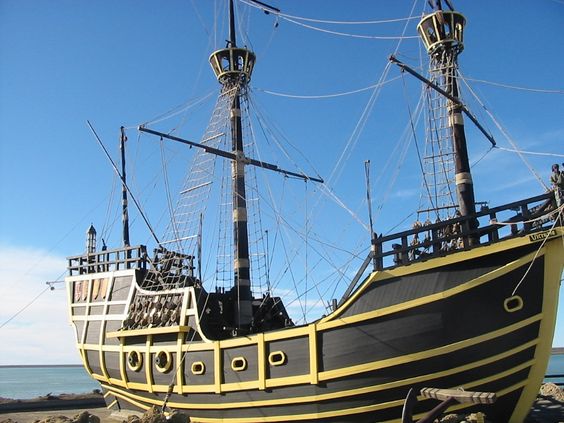 Puerto San Julián is a land of history, from the mutiny against Ferdinand Magellan to the bloody 1920s ranch workers’ strike. The long bay sheltered Magellan’s fleet, pirate Francis Drake and HMS The Beagle (twice). Hike along the coastal road (Circuito Costanero) to birdwatch, and visit historical sites and the giant oyster-encrusted cliffs that sparked Charles Darwin’s Theory of Evolution. On the seafront is a replica of one of Magellan’s ships. Take boat tours to islands in the bay, or land tours to Estancia La María, featuring prehistoric rock paintings, or to Península San Julián nature reserve for birdwatching and fishing.

Camping: Camping Municipal near the seafront, with windbreaks (open year-round); also rustic campsites at Camping Las Bombas on the Circuito Costanero and Playa Instalados on Península San Julián (both accessible by private vehicle). Also in town are hospedajes and hotels.

A popular departure point by bus to Puerto San Julian is from Comodoro Rivadavia.

Lorraine Caputo is a travel writer, poet and translator. She has authored ten guidebooks for South America. Her literary works appear in over 150 journals in Canada, the US, Latin America, Europe, Asia, Australia and Africa; 18 anthologies and eleven chapbooks – including the collections of travel poetry, Caribbean Nights (Red Bird Chapbooks, 2014) and Notes from the Patagonia (dancing girl press, 2017). For more than a decade, she has been traveling through Latin America, listening to the voices of the pueblos and Earth. Follow her travels at: www.facebook.com/lorrainecaputo.wanderer. 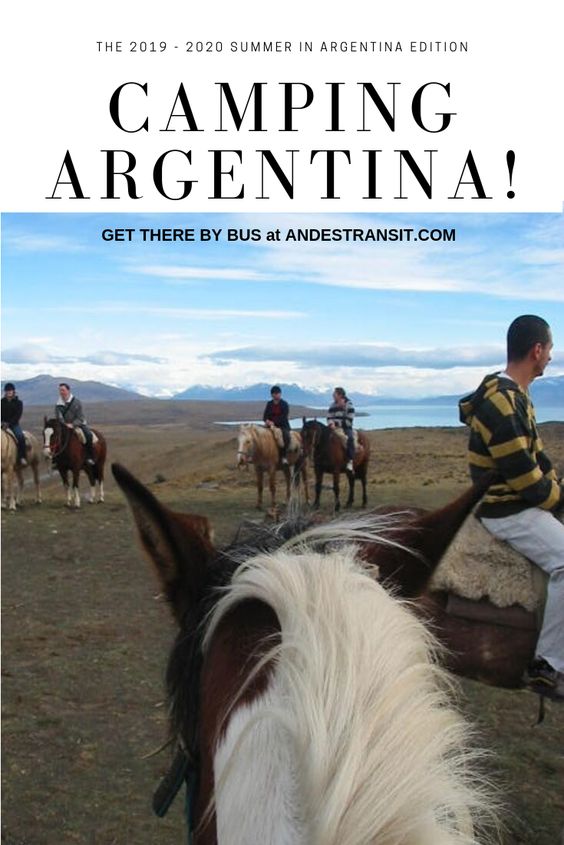